Reflect On Change Of Human-Powered Devices

On this day I enjoyed a 7.1 mile solo scooter ride on the San Gabriel River Trail between the Pico Rivera Golf Course and Washington Boulevard.

We’ve had rain for the past several days here in Los Angeles, so the San Gabriel River has many sections today with water from side to side of the river bed, and all the river vegetation looks way greener than usual.

On this day, there was a window of sunshine from noon to mid afternoon, with a gentle wind blowing up from downstream, which helped on the return, with the hundred feet of elevation change from the starting point to the downstream turnaround at Washington Boulevard.

I passed my cross tracks Northwest Passage from Amigo Park in Whittier to the San Gabriel River Trail, noting for the first time, over the tracks, the upper part of the home plate baseball cage in the park.

Next time I should do my Northwest Passage again from the Whittier side, to be crystal clear about which of the two fence breaks on the trail my path from the baseball field leads to.
Today’s ride was punctuated by two interesting interactions with people.

At the starting point, en route to the rest room at the Pico River Golf Course café, a Mexican guy, Luis, nursing a beer at an outside table inquired about my scooter, with an ensuing discussion about the wheel size, and his story of how he’d had a head injury in an electric scooter mishap in Cleveland the year before.

No E.R. visit. No loss of consciousness. He’d been drunk, he said. As a result of the mishap, he has a one inch diameter depression in his skull. which he allowed me to palpate. A healed depressed skull fracture. Untreated. No neurological evaluation. No X ray. Amazing.

At my turnaround point, I spoke with a delightful Guatemalan couple, Pablo and Damaris, taking a break from their bicycle ride up from their home in Norwalk.

They operate a hauling business, doing their best to carry out an activity they love for the betterment of our great American society.

About the woman named Damaris

A woman named Damaris is mentioned in the Acts of the Apostles, 17:34, in the Book of Acts, in the Old Testament, where she’s swayed by a speech given by the Apostle Paul. She was made a saint in the Greek Orthodox Church.

Damaris from Guatemala told me her dad told her her name means “Dama de Risa, “ or the “Woman who Smiles.” My kind of people. Welcome to America.

Get your copy now of Senior on a Xootr Scooter

Senior on a Xootr Scooter by Jonathan Kelley is now available on Amazon in both Kindle for $12.00 and Paperback for $25.00. 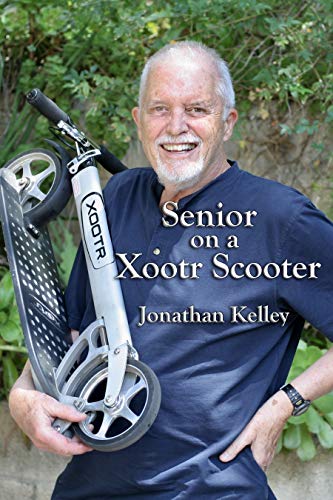 Jonathan Kelleyhttps://www.jonathankelley.net/
Jonathan Kelley, 80, was born in Boston, and educated at Exeter and Princeton, then Harvard Medical School, after a year teaching English in Cali, Colombia. He was a Navy anesthesiologist during Viet Nam. He spent the middle decades of his life working in a community hospital in Northern California. Besides his career in medicine, he’s a chef, pianist, and actor in his artistic life. In the kitchen, he specializes in croissants and cooking with coconuts. At the piano, it’s boogie woogie and Joplin rags. As an actor, he’s done fourteen seasons in a Mexican Christmas play in Los Angeles, plus the occasional movie role, as in the soon-to-be-released feature film “Amor en 266 Millas,” where he plays the hippie patriarch of a desert commune in the Antelope Valley. He has two books available on Amazon, “Counting Backwards from 100: My Life as an Anesthesiologist,” and “Short Stories by Jonathan Kelley.” Searching for improved balance and leg strength at age 77, Jonathan came by chance upon a Xootr scooter. Jonathan’s wife is the lovely Puerto Rican actress Gloria Laino. Their mix is like Puerto Rican arroz con gandules served next to New England style cranberry sauce.

The Gazelle Ultimate C8 HMB is available from a company that has been making quality Dutch bikes, over 250,000 a year, with passion and...

The Trek Powerfly FS9 Equipped is built like a mountain bike, with a durable aluminum frame that fully encases a long-range 625Wh battery. A...

Stromer ST3 Is A High End eBike For Commuters

Switzerland’s Stromer has been making high-end, class-3, city e-bikes since the brand started in 2009. The Stromer ST3, known as the speed pedelec for...

The last time I rode My Xootr Street kick scooter on the San Gabriel River Trail near Byron Zinn Park, in Norwalk, CA, I...

Stromer ST3 Is A High End eBike For Commuters

The Best Folding Bike For Commuters

Andy Thousand is your transportation, gear and tech website. We share human experiences and provide you with the latest innovations and trends in the industry.